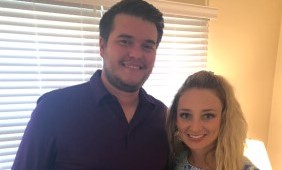 American Mobile travel nurse Mark Turner, RN, has an award that he never imagined he’d receive. He was recently celebrated as AMN Healthcare and The Center’s Q2 2018 recipient of the coveted DAISY Award for Extraordinary Nurses.

Now, Mark might not have ever dreamed he’d receive such an honor, but his wife has known for a long time how deserving he is.

The DAISY Awards were created in 1999 by the family of Patrick Barnes, who passed away at 33, to honor “the super-human work nurses do for patients and families every day.”

As a nurse herself, Kate Turner, RN, knew her husband fit that description. She knows just how demanding his job as an emergency department nurse is. She’s seen him in action, and she’s heard countless compliments from his peers and his patients about his dedication.

So she enthusiastically submitted a nomination for her husband--without telling him, of course.

“He is the best nurse I have ever known, so I knew I had to nominate him,” said Kate. “He is such a kind person and does his job so effortlessly.”

And he won! His recruiter and other AMN staffers presented the DAISY award to him over webcam while he grappled with the news--to the amusement and delight of his wife.

“It was a huge surprise,” said Mark with a laugh. “It was very humbling to be recognized. I’m not used to this kind of recognition.”

But he definitely deserves it.

“I feel like it’s also so rare for ER nurses to get recognized. The patients are usually there during the worst part of their hospital stay, and hopefully a short time, until they are stable enough to go to the floor,” said Kate. “Many patients even forget their ER nurse, but so many patients come up to the floor and remember and talk highly of Mark.”

His Affinity for the Emergency Room

“It was neat for me to think about being on the receiving end then and actually treating patients myself now,” he said.

In fact, he’s spent eight years as an emergency nurse now, and he doesn’t see himself changing any time soon. “I always joke that I don’t know what I want to be when I grow up, but I feel that I will always have an interest in emergency nursing,” said Mark.

What does he love about his work? The pace and the acuity were a big draw, as is the variety.

“No two days are the same,” Mark said. “It’s like a 9-to-5 job where you come in on Monday and push on through to Friday. You never know what you’re going to walk into.”

He appreciates a job that provides many chances to focus on critical details that can mean the difference between life and death. But he also loves the small, intimate moments that he spends with patients who are at their most vulnerable.

“You have these little conversations with people, and it adds up. It means a lot,” he said.

Finding Love While on the Road

Mark became a travel nurse for American Mobile in 2013, taking his first assignment at NYU Cornell in New York City. It was a big change for the man who grew up in a small town in North Carolina. But he loved it. “It was going from driving everywhere to all public transit,” he said.

Then he took other assignments, checking out some places he’d always wanted to visit. Houston. Denver. NYC again. And then he went back to North Carolina and reconnected with his future bride, Kate, whom he’d actually met years earlier in nursing school at East Carolina University. Kate, was also working as a travel nurse, said he “swept me off my feet.”

They decided to travel together and eventually married in June 2017. With the help of their recruiter, Jan S., they received assignments together in New York City, and then they later took a pair of assignments in Napa, California.

“That was our honeymoon of sorts, a cross country trip to relocate for a year,” said Mark. “It was awesome. I’d been there before on a vacation, but to live there was really awesome.”

While the pair have worked in the same hospital at the same time, they’re working at different facilities right now. Mark just took a full-time position in a small hospital with a 30-bed ER in Elizabeth City, North Carolina. His wife is working on a short-term contract on the vascular, transplant, ENT stepdown unit in a hospital in Norfolk, not too far away.

They’re not sure if they’ll take another set of travel assignments in the same hospital again anytime soon, but they aren’t ruling it out for the future, either. After all, they’re young, and as experienced nurses, they have lots of options.

“I just look forward to the opportunities that will arrive in the next few years,” said Mark.

Have you been the recipient of extraordinary care by an AMN Healthcare nurse or know a AMN Healthcare clinician who’s committed to providing excellent care? Nominate him or her for a DAISY Award for Extraordinary Nurses by clicking here.

Profiles & Features MAY 26, 2021
The Hard Work Is Worth It, Says Travel Nurse Jerome Saunders

American Mobile travel nurse Jerome Saunders knows that what you put into your nursing career is what you get out of it. See how his work ethic is paying dividends.

Profiles & Features JUN 15, 2017
10 Things You Might Not Know About Military Nurses
Nurses have a long history of serving in the military. See 10 surprising facts about their service and how it’s changed over the years.
Profiles & Features AUG 03, 2021
Travel Nurse-Turned-Recruiter Is Paying It Forward