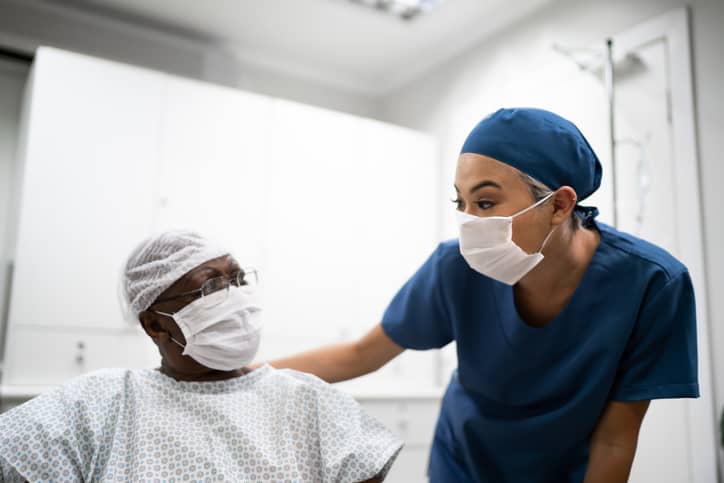 Any health care organization that wants to consistently achieve high-quality patient outcomes should take a good hard look at their nursing staff. If the nurses feel engaged, empowered and satisfied with their working environment, their patients are more likely to do well, too.

The proof is in the data

One way that hospitals can keep their finger on the pulse of nurse job satisfaction and outcomes is with data, like that collected by ANA’s National Database of Nursing Quality Indicators (NDNQI). The program collects information from approximately one-third of U.S. hospitals, allowing hospitals to compare unit-by-unit statistics and enabling them to figure out where they can make improvements.

NDNQI tracks up to 18 nursing-sensitive quality measures, which ANA defines as, “Indicators that are strongly influenced by the care that nurses provide or directly measure nursing as reflected by the structure, process and outcomes of nursing care.” Among other trends, this information continues to provide evidence of the link between nurses’ job satisfaction and the quality of outcomes for the patients they serve.

For example, researchers recently noted that a 25 percent increase in nurse job enjoyment over a two-year span was linked with an overall quality of care increase between 5 and 20 percent.

In the last few years, there have been several major studies and articles highlighting the correlation between nurses’ satisfaction with their jobs or working conditions and patient outcomes, including patient satisfaction:
•    A 2011 study in Health Affairs by a team of researchers led by Matthew McHugh, PhD, RN, at the University of Pennsylvania, found that patient satisfaction was also linked with nurses’ job satisfaction. The researchers found that the percentage of patients who would “definitely recommend” a hospital to their loved ones decreased 2 percent for every 10 percent of the nurses who expressed dissatisfaction with their jobs.
•    A 2009 FORUM white paper titled “The Relationship Between Employee Satisfaction and Hospital Patient Experience” found that organizations that made the effort to improve employee satisfaction experienced improved patient outcomes, including increased patient satisfaction and improved care quality.
•    A 2008 study titled “Patients' Perception of Hospital Care in the United States” that was published in the New England Journal of Medicine, using data from the HCAHPS (Hospital Consumer Assessment of Healthcare Providers and Systems ) survey, found that “the same characteristics of hospitals that lead to high nurse-staffing levels may be associated with better experiences for patients.”

ANA’s Weston notes that NDNQI and other data studies are not just an opportunity for leadership to make some improvements; this information gives individual nurses the chance to do the same.

Nurses can also remind themselves that the link between satisfaction and outcomes exists when they are tempted to downplay the importance of their own needs. That’s a message that the ANA has been working to get across with efforts such as its Healthy Nurse Initiative, which included a conference last year that specifically addressed the importance of nurses caring for their own health and needs.

Weston said that nurses should view investing in their own well-being as worthwhile. “Where it may feel selfish, in reality, it is not,” she said. “Being a healthy nurse and working in a healthy work environment is also good for our patients.”

Nurses aren’t the only employees who find the value in a positive work environment.

A new study that was just published in the September issue of the Journal of Occupational and Environmental Medicine analyzed 15 years’ worth of data from nearly 1,900 adult workers and found that those with adverse working conditions had higher scores for depression. The results suggested that making improvements to the work environment could diminish the risk of depression in working-age adults.

What burden do employers therefore bear to make certain improvements to their work environments? It’s complicated, said study author Sarah Burgard, PhD, and it can vary by industry, size of the organization and so on.

“But it is worthwhile to explore which of these employers can exercise some control over, and which workers find most important in managing their needs and ability to do their jobs well,” she said.

For example, she said, employers could focus on the quality of their organization’s work and try to create a functional atmosphere for employees. That might include policies that address work–life balance or improvement to communications, or even “something else entirely,” she said.

Despite the large and growing body of evidence that patients benefit when nurses have positive working conditions, there is still room for more research--and more efforts to implement improvements based on the evidence. After all, some organizations are still engaging in practices that are shown to diminish morale and job satisfaction among nurses, such as mandatory overtime.

“Great progress has been made,” Weston said. “But I still think that there is a distance for us to go.”

Weston recommended that organizations take cues from the American Nurses Credentialing Center’s Magnet Recognition Program or its Pathway to Excellence Program for recommendations on proven ways to improve the working environments for nurses.

The Magnet program is a rigorous program that recognizes a commitment to excellence in nursing practice and quality patient outcomes, and the Pathway to Excellence program requires that organizations meet 12 standards that are shown to foster an “ideal nursing practice environment.”

Nursing News NOV 19, 2018
What Happens When You Have a Suspended Nursing License
Having a suspended nursing license means you can't legally practice nursing. Many reasons could warrant suspension of your nursing license, and the steps required to petition for reinstatement vary by state. Learn more about what happens when you have a suspended nursing license with this guide.
Nursing News SEP 25, 2018
Critical Thinking in Nursing: Why It's Important and How to Improve
Critical thinking in nursing is the difference between blindly following the doctor's orders and accepting responsibility for your patient's care. Here are some examples of critical thinking in nursing and why it's so important.
Nursing News JAN 16, 2020
Do Nurses Take the Hippocratic Oath?
There may not be a Hippocratic Oath for nurses, but that doesn't mean new graduates are completely without a shared moral compass. Learn more about the Hippocratic Oath and how nurse ethics are shaping modern-day patient care.
Nursing News OCT 29, 2018
Compassionate Nurse: The Importance of Compassion in Nursing
Being a compassionate nurse is vital, because it helps ease your patients' pain and suffering while providing the emotional support they need. Learn more about the importance of compassionate care and how your patients benefit with our examples of compassion in nursing.
Nursing News JAN 18, 2019
Nurse Leadership: 5 Ways to Improve Your Nurse Leadership Skills
Nurse leadership skills are vital in advancing your career and improving patient outcomes. Developing your nurse leadership qualities enhances your leadership skills. Learn five ways you can improve your leadership skills in this guide.