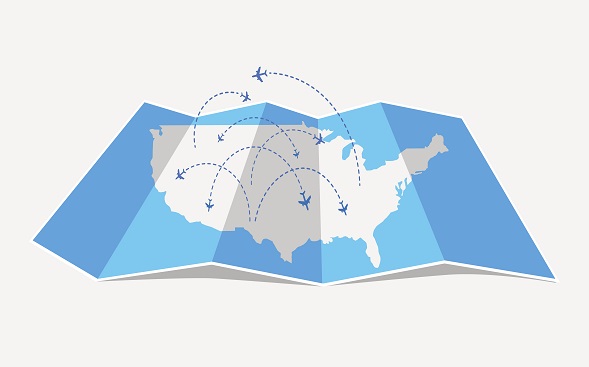 Working across state lines has not always been a simple process for healthcare professionals. Each state board has its own regulations and hoops to jump through for granting licenses to practice in their state--whether for nurses or physicians.

Yet several trends in recent years have emphasized the need for greater flexibility working across state boundaries, including the growth of telemedicine, travel nursing and other fields of travel healthcare.

It all started with the Nurse Licensure Compact

So, 15 years ago, the National Council of State Boards of Nursing (NCSBN) worked to streamline interstate practice with the Nurse Licensure Compact, or NLC, which has since been enacted by 25 states.  This allows licensed practical nurses or registered nurses with a compact nursing license to work any of the other compact states without securing a new LPN or RN license.

A new version of this multi-state licensure agreement for nurses is now being ratified and could go into effect by late 2017 or early 2018.

The Interstate Medical Licensure Compact is now taking off

The medical community has since taken its cues from the nurses’ multi-state licensure agreement; it is currently ratifying a medical licensure compact that grants interstate practice privileges to physicians who hold medical licenses in good standing in any of the compact states.

Maine joins a growing list of states that have enacted legislation to expedite multi-state medical licensure since 2015.

“We are pleased that Maine has joined 21 other states who are dedicated to increasing access to health care by expediting licensure for willing and qualified physicians,” said FSMB President and CEO Humayun Chaudhry, DO, MACP.

“At a time when our nation’s physician shortage is disproportionately impacting rural communities, it is critical that states like Maine are able to attract eligible physicians from across state lines to treat patients in need,” Chaudhry continued.

The IMLC, which has drawn broad support from national and state health care groups, was supported in Maine by the Maine Chapter of the American Academy of Pediatrics.

The states that have ratified the Interstate Medical Licensure Compact as of early July 2017 include:

The multi-state licensure agreement for physicians remains under consideration in Michigan, Rhode Island, Texas, the District of Columbia and Guam.

AMERICAN MOBILE can help you get your RN license in the states where you want to work! BROWSE top travel nursing jobs in all 50 states to find out more.

Nursing News JAN 16, 2020
Do Nurses Take the Hippocratic Oath?
There may not be a Hippocratic Oath for nurses, but that doesn't mean new graduates are completely without a shared moral compass. Learn more about the Hippocratic Oath and how nurse ethics are shaping modern-day patient care.
Nursing News SEP 25, 2018
Critical Thinking in Nursing: Why It's Important and How to Improve
Critical thinking in nursing is the difference between blindly following the doctor's orders and accepting responsibility for your patient's care. Here are some examples of critical thinking in nursing and why it's so important.
Nursing News JUN 15, 2017
The Top Ethical Challenges for Nurses
Nurses experience moral distress when they cannot do “the right thing” for patients. See what tops the list of ethical dilemmas.
Nursing News AUG 24, 2016
10 Ways to Ensure Respectful Care of ICU Patients
ICU nurses work in stressful environments to save lives; these 10 things help maintain patient dignity and treat ICU patients with respect amid the chaos.
Nursing News NOV 9, 2018
Top 10 Advantages and Disadvantages of Being a Nurse
Helping save a life and making a positive difference in your patients’ quality of care are major advantages of being a nurse, but there are also some disadvantages. Decide if a nursing career is right for you with this list of top advantages and disadvantages of being a nurse.