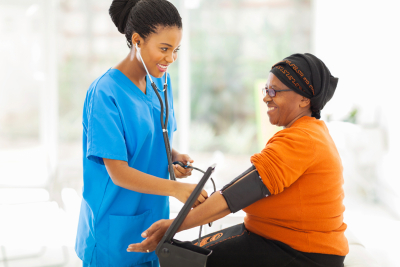 February is Black History Month, which is a great opportunity to recognize the valiant efforts of African-American nurses throughout history who were dedicated to advancing the healthcare field and advocating for future nurses.

Early African-American nurses faced and overcame considerable inequality and prejudice to pursue their dreams of getting an education, entering the medical field and helping save lives.

Their strength of spirit truly changed the course of history and the nursing profession. There have been many African-American nurses throughout history who fought to overcome racial prejudices to excel in the nursing field.

Read about five extraordinary African-American nurses who continually strove to change healthcare for the better and pave the way for others.

Harriet Tubman was best known for guiding slaves to freedom and her civil rights efforts, but she also served as a nurse. While she never received formal training, she used her knowledge of herbal medicine to treat injured soldiers during the Civil War.

Following the war, Tubman continued nursing wounded soldiers and was appointed matron of the Colored Hospital at Fortress Monroe, Virginia. She also helped found the Home for Aged and Indigent Colored People and lobbied for educational opportunities for freedmen. She was later awarded a nurse’s pension and received full military honors at her burial in Fort Hill Cemetery.

As a leader in the nursing field, one of Williams’ most notable achievements was co-founding the National Black Nurse Association in 1971. She later served as the group’s seventh president, co-founded the National Coalition of Ethnic Minority Nurse Associations and led members to create the NCEMNA: Nurse Scientist Stimulation Program.

Mary Eliza Mahoney undoubtedly paved the way for future generations when she became the first registered African-American nurse in 1879 after graduating from a professional nurse training program.

Mahoney was a fervent believer in racial equality in nursing, spending much of her life engaged in ending discrimination. She co-established the National Association of Colored Graduate Nurses in 1908 and gave the address at its first conference.

In recognition of her contributions to the profession over her 40-year nursing career, the NACGN established the Mary Mahoney Award in 1936.

The American Nurses Association took over the presentation of this award in 1952 following NACGN’s merger with the ANA. Mahoney was one of the first inductees into the ANA Nursing Hall of Fame and a 1993 inductee into the National Women’s Hall of Fame.

A 1984 ANA Hall of Fame inductee, Estelle Massey Osborne left her mark on the nursing profession by dedicating her life to paving the way for other African-American nurses.

Osborne was the first African-American nurse to earn a master’s degree and the first to become an instructor at New York University. She used her activism to further the nursing field by fighting for African Americans to serve in the Army Nurse Corps and American Red Cross.

As president of the NACGN, she forged relationships with the ANA, National Organization for Public Health Nursing and National League for Nursing.

She was awarded the Mary Mahoney Award in 1946 for her efforts to broaden professional nursing opportunities for African-American nurses and served on the ANA Board of Directors from 1948-1952.

To honor her many accomplishments, the Estelle M. Osborne Memorial Scholarship was established in 1982 to annually assist an African-American nurse pursing a master’s degree in nursing.

Some of the many highlights of Brown’s career include becoming head nurse in just three months at the Philadelphia Veterans Administration Hospital, joining the Army Nurse Corps, serving on the medical-surgical ward at Walter Reed Army Medical Center, earning her bachelor’s and master’s in nursing, teaching students at Letterman General Hospital and becoming Director and Assistant Dean of the Walter Reed Army Institute of Nursing.

Brown’s impressive nursing abilities prompted her quick rise in rank in the army until she became the first African-American woman promoted to brigadier general and head of the Army Nurse Corps.

These are but a few examples of the many African-American nurses who’ve inspired others by their dedication and achievements in the nursing field despite facing incredible challenges.

It’s important to remember what they and others like them have contributed to the nursing profession through their remarkable service and advocacy so that others might follow in their footsteps and achieve even greater things.

Nursing News JAN 16, 2020
Do Nurses Take the Hippocratic Oath?
There may not be a Hippocratic Oath for nurses, but that doesn't mean new graduates are completely without a shared moral compass. Learn more about the Hippocratic Oath and how nurse ethics are shaping modern-day patient care.
Nursing News OCT 29, 2018
Compassionate Nurse: The Importance of Compassion in Nursing
Being a compassionate nurse is vital, because it helps ease your patients' pain and suffering while providing the emotional support they need. Learn more about the importance of compassionate care and how your patients benefit with our examples of compassion in nursing.
Nursing News NOV 19, 2018
What Happens When You Have a Suspended Nursing License
Having a suspended nursing license means you can't legally practice nursing. Many reasons could warrant suspension of your nursing license, and the steps required to petition for reinstatement vary by state. Learn more about what happens when you have a suspended nursing license with this guide.
Nursing News JUN 25, 2020
5 Team Building Activities for Nursing Units
Is your nursing unit lacking unity? Learn about five team-building activities for nursing units that supervisors and other nursing leaders can use to promote a sense of belonging among the nursing unit.
Nursing News SEP 25, 2018
Critical Thinking in Nursing: Why It's Important and How to Improve
Critical thinking in nursing is the difference between blindly following the doctor's orders and accepting responsibility for your patient's care. Here are some examples of critical thinking in nursing and why it's so important.
Travel Nursing Questions
How can I help you?