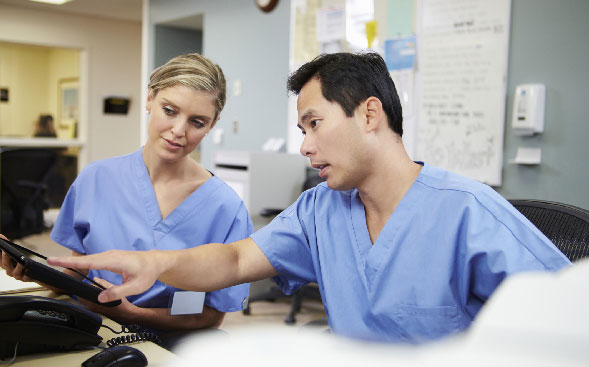 Graduating from nursing school is an achievement in itself; making a successful transition into the registered nurse workforce is quite another. In an effort to enhance development of clinical skills and nurture growth in both career and confidence, facilities across the country have implemented mentorship programs for newly graduated nurses.

When nursing units at Stanford University Medical Center, in Stanford, California, noticed a turnover trend among new graduates after just one or two years on the job, they decided to look for a way to hold on to new nurses and encourage them to advance in their career within the facility. The result was a mentorship program, designed to show new grads their worth within their units and provide them the support they need to succeed in their early careers.

Once they have completed the facility’s orientation program, every new grad is admitted into the mentorship program, through which they get to know the mentors in their unit. The new grads select a mentor to work with over a three-year period, meeting monthly for the first year to go over career goals and challenges.

“That person is meant to stay close to the new grad to find out how they’re fitting into the unit,” explained Debra Grant, RN, MBA, CNAA, director of nursing at Stanford Hospital.

“During the third year, the meetings are to find out the nurse’s career aspirations,” Grant added. “By this time, many new nurses are ready to move to different units--critical care or the emergency department. We want to capture where they want to move so we can help them get into that unit within the hospital, instead of leaving to work at another facility.”

According to Grant, new nurses face a number of challenges as they transition from nursing student to working nurse.

“At Stanford, in particular, the acuity is higher than at a community hospital because we are an international facility,” she said. “Many new grads come in afraid and unsure of themselves. It’s harder to become a stronger nurse when they see so much of the acute stuff that only Stanford would see. Plus, we also have special equipment,” that is often new to the new-grad nurses.

“Having a mentor gives them the extra teaching and support,” Grant said. “The new nurses get to use the equipment with a mentor who is there to help them remember the steps.”

The program, and the bonds it helps create between new and experienced nurses, also encourages the new nurses to ask questions they may otherwise feel embarrassed to ask--questions, Grant added, that all nurses have early in their career.

“The program has created a friendship that gives the new grads the trust to ask questions that everyone has,” she said. “The mentors are really good about saying ‘That’s a common question.’ No question is ever a stupid question, but that’s a concern that many new grads have.”

In the year-and-a-half the program has been in existence, Stanford has seen an increase in job satisfaction among the new-grad group, as well as among the rest of the nursing staff.

“The mentors have truly gotten enjoyment out of working with the new grads,” she said. “When you see 10 nurses with new grads in different stages of the program, you see everyone helping out. They’re sensitive and keeping their eyes out for new grads that need assistance. It truly creates a culture of mentorship on the entire unit.”

The new grads, as well, have expressed positive sentiments about the program.

“We’ve gotten great feedback from the new grads who know this is something we offer that many other facilities don’t,” Grant said. “Interestingly, as soon as they get out, many want to be mentors. We are building mentors for the future. They have had a great experience and want to make sure other new nurses do too.”

New Graduates SEP 30, 2016
4 Coping Skills for New Nurses
New nurses need “go-to” coping skills when on the job. These four strategies can help you deal with nursing stress and perform at your best on every shift.
New Graduates JUN 26, 2020
10 New Grad Nurse Resume Mistakes to Avoid
Writing a new grad nurse resume can seem like a daunting task. But by avoiding these 10 mistakes, your new graduate nurse resume can rise to the top of the selection.
New Graduates JUN 15, 2017
New-Grad Interviewing Tips: How to Make the Right Impression
Get practical advice on how to make a great first impression and interviewing tips for new nursing grads.
New Graduates JUN 15, 2017
A Look at New Nursing Technologies and Trends
Nursing technology to ease and streamline each nurse's workload so the focus can stay on patients.
New Graduates JUN 15, 2017
Overcoming Anxiety: Tips for New Nurses
New nurses are under more pressure than ever before and anxiety can make their transition from school to work a challenge. Read these tips on how to cope.