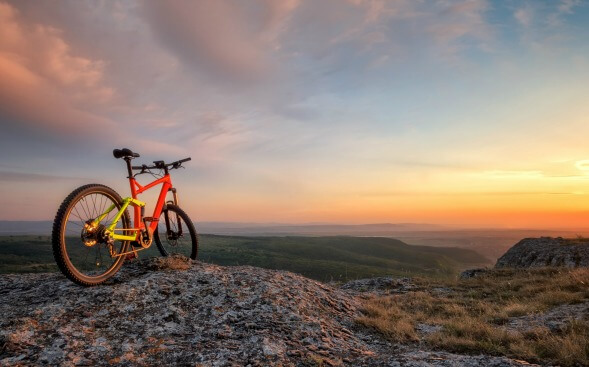 What if you could experience “life on the road”—literally—with just you and a bike?

Travel nursing is one way to experience this great country, and cross-country cycling is another; when someone gets to do both, just imagine what he can see, learn and give back to all the people he meets.

“I’m trying to promote positivity and love and to share joy. When you get away from the negativity, you realize how good people are and how powerfully you can make an impact,” said ICU travel nurse and adventure cyclist Ryan Davis, RN, recent winner of American Mobile’s Adventure Photo Contest on Instagram.

Davis has an unusual RN career. He is maximizing the flexibility of his travel nursing jobs by working eight months each year and using the other four to cycle across the country. He’s also making some great friends and capturing some great memories and photographs along the way.

LEARN MORE about travel nursing from the experts at American Mobile.

Finding his passion in adventure cycling

“The first year I started working as a traveler, I still worked eight months and took four months off, not all at once, but I was spending my months off binge-watching TV, cooking, relaxing, gaining weight, all while spending it with the ones I love,” Davis remarked.

“Then one day at the gym I was talking to this guy who told me that he had done the TransAmerica Bicycle Trail and all the great things about the ride. Somehow it clicked and I knew I had to do it.”

So, Davis worked travel nursing assignments for eight months straight and planned his next few months off so he could bike the trail from Virginia Beach to Astoria, Oregon. He averaged about 70 miles per day on his bike and finished the trail in 76 days.

“The ride goes through the heartland of America and is very well resourced—dotted with small towns where you can stop at pubs, restaurants, parks, hostels, and churches that are bike-friendly, with welcoming people to put me up for the night.”

Davis started envisioning his second trip while he was still making his way across the country.

“I felt like I wanted to visit my friends and family all along the East Coast.” So he worked another eight months and then cycled from Lubec, Maine, to Key West, Florida, and back up the Blue Ridge Parkway.

“On that ride, I stayed with many different people, many of whom I connected with through an organization called Warm Showers.”

Learning to get the right shot

“That is where my photographs really started to improve. At first, I had just been using my phone, but I had the chance to get a higher quality camera and I took it. A little extra weight, but it has been worth it,” Davis said.

“I call a lot of my photography ‘road scaping’—it is about catching a certain bend in the road and the sky. I think the land gets more photogenic as you head West.”

“Other people will say to me, ‘I’ve taken those same roads and I can never get a picture like that.’ That is nice to hear.

See Davis’ striking images from the road on his Instagram page: @rnrides.

Other benefits of life on the road

Davis added that experiencing different foods and meeting new people is a big part of his cross-country travel experience.

“It is amazing what you will find in the middle of nowhere. That is what I love about bike touring: I’ve gone through these little towns with good people and good food that I would have never been able to experience by car.”

He’s grateful that his travel RN career with American Mobile is allowing him to pursue extended cycling adventures each year.

“I love being a nurse and it has allowed me to meet amazing people and impact many, but there is something magical that happens when it is just me and my bike on the open road.”

GET IN TOUCH with your adventurous side:

Profiles & Features NOV 08, 2016
Top 5 Travel Nursing Ski Destinations
Consider a travel nursing job in top ski destinations across the country. From Colorado to Vermont, spend a season on the slopes with American Mobile.