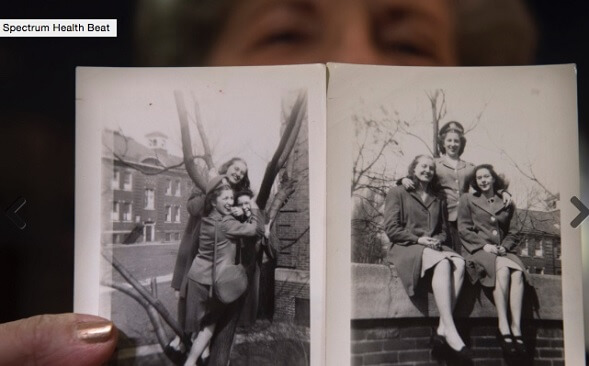 This Memorial Day, the country will remember all of the people who have served in the U.S. armed forces and those who lost their lives doing so, including the approximately 1,000 nurses who died in the line of duty during World War I and II, Korea, Vietnam, Operation Desert Storm and the War on Terrorism.

In December 1941, when Japan attached Pearl Harbor and the United States entered World War II, fewer than 1,000 nurses served in the Army. But 74,000 nurses joined the Army and Navy Nurse Corps during that massive war effort. With all of these nurses entering the military, civilian and veterans hospitals lost staff.

Nurses could not be trained fast enough to meet demand.

The United States stepped in and established the U.S. Cadet Nurse Corps with the Bolton Act, the first federal women’s education program. Nursing schools accelerated their curricula and applied to the U.S. Public Health Service to participate.

Rita Salvo, 89, a cadet nurse during World War II, now lives at Friendship Village in Tempe, Arizona, and said she likes it. She trained at Kings County Hospital in Brooklyn, New York, and served at a Veterans Administration hospital in Bronx, New York.

“We took the place of nurses who went into the service,” Salvo said. “We were civilians in uniform.”

The federal government paid for the student's tuition and a stipend of $15 per month, and the students agreed to work in military or civilian hospitals for the duration of the war.

“It was a wonderful opportunity for me,” said Joyce Winchester, who joined the corps and entered the Butterworth Hospital School of Nursing in Grand Rapids, Michigan, in 1945 just after her 18th birthday. She always wanted to be a nurse, so the Cadet Nurse Corps meshed with her goals.

Cadets also received a gray skirt and jacket with red epaulets and a nurse emblem. The cadets wore them on special occasions. Winchester remembers not having enough uniforms for every nurse, forcing the cadets to share them when going out.

“We were good buddies,” Winchester recalled.

Winchester later obtained a degree and stayed in nursing, as a faculty member at Butterworth, until 1981 and continues to serve as an emeritus member of the Spectrum Health Foundation. Butterworth Hospital is now a Spectrum Health facility.

“I never had a boring day in my career; I loved it,” Winchester declared.

From 1943 through 1948, nearly 180,000 nursing students, like Winchester and Salvo, joined the cadet program, and in 1945, these cadet nurses were providing 80 percent of the care received in U.S. hospitals, even though many were still students. They even served as charge on night shifts, with a night supervisor checking in periodically, Winchester said.

“I thank the good Lord, we didn’t make any mistakes,” Winchester said. “I think, ‘How did they leave us in charge?’ But they needed us.”

Winchester reminisced about how different nursing has become. As a cadet, she always gave her patients a back rub and bath.

“When I gave that patient a bath and a backrub, I talked to them and found out about their needs, their pains, their families,” Winchester said. “You could do an assessment while giving a bath.”

Salvo said she had fun taking care of the veterans and called them cheerful in adjusting to their injuries. She continued working at the VA for five years after she was no longer a cadet.

Both nurses are proud of their service in the Cadet Nurse Corps.

“Tom Brokaw called us the Greatest Generation because we got things done,” Winchester concluded.

How high can travel nursing take you? Natalia Z., a travel nurse and outdoor adventurer, recently climbed to Mt. Everest Base Camp.

Profiles & Features APR 09, 2019
How to Fit in a Workout After a Long Nursing Shift
Grab some exercise before, during or after a long nursing shift to improve your health, lose weight and feel better. Even short, intense workouts benefit nurses who aren’t getting as much exercise at work as they think. Learn some tricks to fit in a workout with this guide.
Profiles & Features JUN 13, 2022
Two American Mobile Travelers