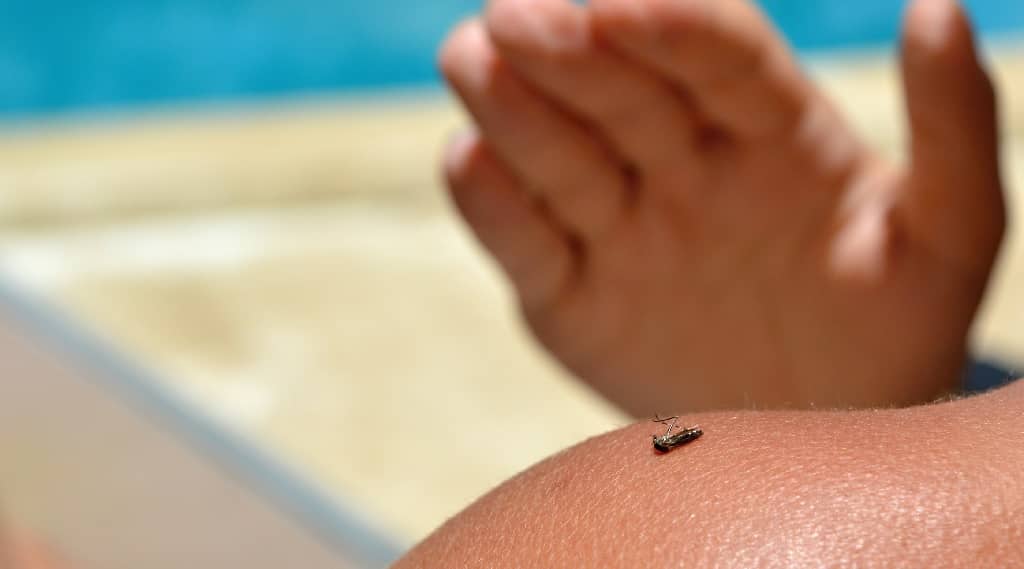 With warm weather here, it’s time to take steps to prevent mosquito-borne and other insect-related illnesses such as Zika, Dengue, encephalitis, West Nile Virus and Lyme disease. Here’s what you need to know about patient symptoms and protecting your own health while on a travel nurse assignment. (Stay current with CDC travel health alerts.

Prevent mosquitoes from breeding
Florida residents like myself know the drill. Wear protective clothing, use citronella candles and bug spray and try to avoid the outdoors from dusk to dawn. Standing water is a big issue.
•    The best way to reduce mosquitoes? Eliminate the hidey-holes where the mosquito lays her eggs (tires, artificial containers, even bromeliads).
•    Outdoors: Clean water containers like pet and animal watering containers, upside-down Frisbees, clogged gutters, unused flower pots or cover water storage barrels.
•    Indoors: Look for standing water (vases with fresh flowers) and clean at least once a week.
•    Repair holes in window screens.
•    Learn about EPA-approved mosquito repellents and their safe use.

Workplace health & safety
Pregnant travel nurses should avoid international travel to countries with Zika outbreaks and other insect-related illnesses; they may also want to use extra caution in tropical and subtropical areas of the U.S. known for their mosquitoes, like south Florida and Texas. The Aedes aegypti mosquito, which primarily transmits Zika, is present in about 30 U.S. states, and more than 250 Zika cases have been reported in Florida as of June 30 (Miami Herald). The good news: none of the Florida Zika cases confirmed so far have been transmitted locally by mosquitoes.

In early May, the Pan American Health Organization reported that the Asian Tiger mosquito (albopictus) can also transmit the Zika virus, increasing the geographic scope for infection to New England and the lower Great Lakes.

Miami, New Orleans and Charleston, S.C., are among the U.S. cities at highest risk for Zika virus, but there is some risk up the East Coast and even stretching west to California, according to a modeling study, PLOS Currents: Outbreaks, from an  analysis conducted by the National Center for Atmospheric Research.

Public works departments have increased their numbers of mosquito traps and will be spraying, especially around areas where women and children gather, such as playgrounds.

Hospitals are also being proactive. In April, the Occupational Safety and Health Administration and the CDC asked employers to take steps to protect workers from the Zika virus. In health care settings, standard measures for infection control should include the use of personal protective equipment to avoid direct contact with blood and other potentially infectious materials.

More About Zika
The Zika virus outbreak was first detected in Brazil last year and has been spreading across Latin America, Puerto Rico, Cuba, Central America and now the United States. The World Health Organization declared a global health emergency in February. Just this spring, U.S. Health Department officials confirmed that Zika can be spread by mosquitoes and sexual contact.

Travel nurses working in L&D and other specialties should be educated about recognizing the symptoms. The primary concern is women who are pregnant or are considering pregnancy, as the Zika virus can cause microcephaly--a birth defect marked by an unusually small head size and incomplete brain development. Most adults with Zika have few symptoms and will recover without incident, but some can suffer neurological issues, with some evidence that patients with the virus may be prone to the paralyzing Guillain-Barré syndrome.

State and local health departments are pitching in to stem the spread of the disease, eradicating standing water and educating people about avoiding mosquito bites. For travel nurses on the forefront of Zika diagnosis and care, it’s important to keep current on the latest Zika virus news.

Get the CDC’s clinical support guidelines for Zika.

Dengue
With 400 million people infected annually and no vaccine, the best prevention for Dengue virus is avoiding mosquito bites. If the virus is detected, early intervention and prompt treatment can reduce the risk of medical issues. As of late April, Hawaii and Florida were on alert for Dengue fever.

Get the CDC’s clinical treatment guidelines for Dengue.

Eastern and Western Equine Encephalitis
I detest mosquitoes as I contracted encephalitis after a 80s’ trip to Ensenada, Mexico (after monsoon rains). It was a life-changing illness that still affects me today. Some people don’t even know they are sick, but for others, like me, the brain inflammation began with the sudden onset of headache, high fever, chills, and vomiting and a hospital stint, followed by terrible joint pain and fatigue for two weeks at home in a darkened room. Had a smart nurse not mentioned to a doctor that many people who visited Baja shared my symptoms, I might not have been diagnosed.

Lyme disease
Transmitted to humans through the bite of an infected black-legged tick, Lyme disease is caused by the bacterium Borrelia burgdorferi. According to the CDC, symptoms of Lyme disease include fever, headache, fatigue, and a characteristic skin rash called erythema migrans. If left untreated, infection can spread to joints, the heart and the nervous system.

Get the CDC’s clinical information on Lyme disease.

Don’t let the buzz about these insect-related illnesses get in the way of your summer adventure. Just be prepared, educate your patients and enjoy all that summer has to offer!

Nursing News JAN 16, 2020
Do Nurses Take the Hippocratic Oath?
There may not be a Hippocratic Oath for nurses, but that doesn't mean new graduates are completely without a shared moral compass. Learn more about the Hippocratic Oath and how nurse ethics are shaping modern-day patient care.
Nursing News OCT 29, 2018
Compassionate Nurse: The Importance of Compassion in Nursing
Being a compassionate nurse is vital, because it helps ease your patients' pain and suffering while providing the emotional support they need. Learn more about the importance of compassionate care and how your patients benefit with our examples of compassion in nursing.
Nursing News SEP 25, 2018
Critical Thinking in Nursing: Why It's Important and How to Improve
Critical thinking in nursing is the difference between blindly following the doctor's orders and accepting responsibility for your patient's care. Here are some examples of critical thinking in nursing and why it's so important.
Nursing News AUG 28, 2018
How To Get a Compact Nursing License
Learn how to obtain a compact nursing license with a few easy steps. Whether you're looking to relocate to be closer to family or just enjoy traveling the country, a compact nursing license is your ticket to advancing your career.
Nursing News NOV 19, 2018
What Happens When You Have a Suspended Nursing License
Having a suspended nursing license means you can't legally practice nursing. Many reasons could warrant suspension of your nursing license, and the steps required to petition for reinstatement vary by state. Learn more about what happens when you have a suspended nursing license with this guide.