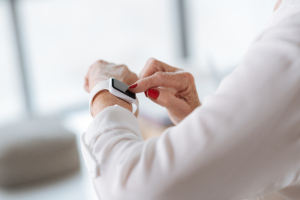 By by Tiffany Aller

Top Pros and Cons of the Apple Watch for Nurses

The Apple Watch is more popular than ever, selling more to consumers during just one quarter than “the entire Swiss watch industry combined,” according to Business Insider.

While this full-featured product is sought after by people from all walks of life, for nurses, the Apple Watch represents an opportunity to efficiently accomplish many daily tasks.

Although not officially touted as nursing technology, the Apple Watch has many pros— including the ability to function hands-free—that enhance nursing.

Learn more about the Apple Watch for nurses and its many benefits as well as a few drawbacks.

THE PROS AND CONS OF APPLE WATCHES FOR NURSES

Pros of Apple Watches for Nurses

Nurses use watches as a part of their everyday practice for many reasons, ranging from taking pulses to setting reminders to check on patients or administer medications.

Additionally, many rely on the functions of their cell phones to look up important information, communicate with team members and log information to chart later on.

All of that and more can be accomplished with just the Apple Watch.

The current Series 3 watch has cellular, Wi-Fi and GPS connectivity, has an enormous face compared to traditional watches and offers language, dictation and Siri support in dozens of languages.

You can time your pulse-taking, dictate notes and connect with others, all while providing patient care and largely hands-free.

The Series 4 Apple Watch, which analysts estimate will be released in Fall 2018 is expected to include an always-on Siri function so you can summon assistance, launch apps or make calls without pushing buttons or even touching your watch.

That means nurses won’t have to interrupt precious patient time to accomplish any of those functions, so they can provide more effective and efficient care and work towards more positive overall outcomes.

Cons of Apple Watches for Nurses

If you’re considering purchasing an Apple Watch to add to your nursing technology collection, keep in mind there are some drawbacks to this device.

One of the most significant is that the Apple Watch is iPhone dependent — you must have an iPhone with an active cellular account for the Apple Watch to access your apps and perform its primary functions.

That means if you’re an Android user right now, you’ll have to convert before buying your new watch.

Another con is that while many apps have become available through Watch OS, they’ll sometimes function differently than on your iPhone or other Apple device.

This is primarily due to the much smaller screen space and a limitation in the buttons and gestures you can make.

When you first purchase an Apple Watch, you set it up using your iPhone’s Apple Watch app and can learn which iPhone apps are compatible with it.

To test whether an Apple Watch would be beneficial to you, visit an Apple Store near you or try online virtual test drives to fully explore its offerings.

Nursing News JAN 16, 2020
Do Nurses Take the Hippocratic Oath?
There may not be a Hippocratic Oath for nurses, but that doesn't mean new graduates are completely without a shared moral compass. Learn more about the Hippocratic Oath and how nurse ethics are shaping modern-day patient care.
Nursing News OCT 29, 2018
Compassionate Nurse: The Importance of Compassion in Nursing
Being a compassionate nurse is vital, because it helps ease your patients' pain and suffering while providing the emotional support they need. Learn more about the importance of compassionate care and how your patients benefit with our examples of compassion in nursing.
Nursing News SEP 25, 2018
Critical Thinking in Nursing: Why It's Important and How to Improve
Critical thinking in nursing is the difference between blindly following the doctor's orders and accepting responsibility for your patient's care. Here are some examples of critical thinking in nursing and why it's so important.
Nursing News AUG 28, 2018
How To Get a Compact Nursing License
Learn how to obtain a compact nursing license with a few easy steps. Whether you're looking to relocate to be closer to family or just enjoy traveling the country, a compact nursing license is your ticket to advancing your career.
Nursing News NOV 19, 2018
What Happens When You Have a Suspended Nursing License
Having a suspended nursing license means you can't legally practice nursing. Many reasons could warrant suspension of your nursing license, and the steps required to petition for reinstatement vary by state. Learn more about what happens when you have a suspended nursing license with this guide.