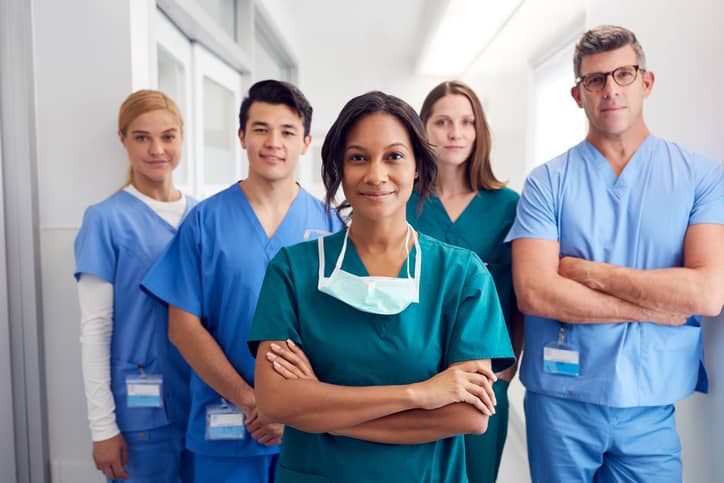 Nurses Among Most Influential People in Healthcare

Modern Healthcare readers selected four nurses in leadership roles to be ranked on this year’s 100 Most Influential People in Healthcare list, based on their effect on the industry.

“It’s great for nursing, because we do this together,” said Marla J. Weston, PhD, RN, FAAN, chief executive officer of the American Nurses Association, who made the magazine’s annual list for the first time, ranking 45th.

“I’m honored to be recognized,” she continued, “but I realize this is not about me. It’s about the hundreds and thousands of nurses working together to make the American Nurses Association a powerful force, to make nursing a powerful force, and to help our colleagues in health care and the general public understand the impact of nursing practice. I am the lucky person to be in the CEO role, but there are a lot of people making this happen.”

“The four nurses on Modern Healthcare’s 100 Most Influential People list this year are transformative and visionary leaders, and some of the brightest lights in the nursing world,” said Susan B. Hassmiller, PhD, RN, FAAN, the Robert Wood Johnson Foundation senior adviser for nursing. “They are role models.”

Weston was one of 19 new people to join the list, which is dominated by elected and appointed government officials, top executives of health care industry corporations and physicians. Anyone can nominate a candidate. The magazine received 15,000 submissions for 2014. The top 300 nominees, including 10 nurses, were presented to Modern Healthcare readers for voting. Half of the candidates are selected through the reader votes and the other half by the magazine’s editors.

While not a nurse, RoseAnn DeMoro, executive director of National Nurses United (NNU), with 185,000 members, made the list again, at 41st.

“With the disproportionate economic influence of the hospital and insurance giants in particular, it is especially gratifying to see the name of RoseAnn and NNU on this list,” said NNU Co-president Deborah Burger, RN.

With the relatively small showing for nursing on this year’s list, opportunity exists for more nurses to move up to positions of leadership and influence.

“Nurses spend the most direct time with patients and, therefore, offer a vitally important perspective,” Keehan said. “As a nurse myself who moved into leadership, I encourage nurses to lend their voice to management decisions and consider leadership roles in their units or hospitals. It may not feel natural for some nurses to assert themselves, but the future of health care requires that we listen to their ideas and concerns. I hope to see many more nurses bring their passion for patient care and support of staff to the work of making health care better for everyone.”

Weston pointed out that nurses practice throughout the health care system, not only in hospitals but in home health, public health, primary care and long-term care. They observe when the system works and when it doesn’t for patients.

“That gives nurses the capacity to help make the system work for patents and communities and to redesign the system to transform and improve care,” Weston said. “Nurses are stepping forward to be leaders, and people are understanding nurses are not just functional doers of things, but thoughtful strategists.”

Weston expects more nurses will make the list in the years ahead. She encourages nurses to talk more about the work they do and the effect it has on people.

“The more we highlight the impact we are making, the more people will understand the great strategists and decision makers that nurses are,” Weston said. “There are a lots of pockets of innovation being led by nurses that are improving the quality of care, reducing the cost of health care and improving the access. We need to support each other in taking those pockets of innovation and spreading them.”

Weston has forged partnerships with other disciplines when delivering clinical care and when transforming the health care system.

“Health care is a team sport,” Weston said. “The degree we can work together catalyzes the work getting done.”

Increasing the number of nurses in leadership positions is one of the key recommendations of the Institute of Medicine’s groundbreaking Future of Nursing report and a central goal of the Campaign for Action.

“As the largest group of health professionals, and as those who spend the most time with patients, nurses have unique insight into health care,” Hassmiller said. “We need that insight at the highest levels of our health care system--on the boards of health care systems and hospitals; leading federal, state and local agencies; and more.”

Two members of the Campaign for Action’s strategic advisory committee made the 2014 Most Influential People in Healthcare list: Leah Binder, president and CEO of The Leapfrog Group, and Alan Morgan, CEO of the National Rural Health Association. Additionally, several members of organizations on the Champion Nursing Council and Champion Nursing Coalition were recognized.

“Health care transformation is underway in our country,” Hassmiller concluded. “Nurses possess the skills to ensure that the perspectives of people, families and communities remain front and center in any health decisions that get made.”

Maureen Bisognano, MSN, president and CEO of the Institute for Healthcare Improvement, began as a staff nurse in 1973 at Quincy City Hospital, moved up and became chief operating officer in 1986, before joining IHI. Bisognano is one of many quality improvement leaders on this year’s Most Influential list.

Sister Carol Keehan, DC, MS, RN, president and CEO of Catholic Health Association, started out as a nurse and served in the 1980s as Providence Hospital's vice president for nursing, ambulatory care, and education and training. She joined the Catholic Health Association in 2005. She told NurseZone that she hopes many more nurses will bring their passion for patient care to make health care better for everyone.

Marilyn Tavenner, MHA, BSN, agency administrator with the Centers for Medicare and Medicaid Services, began her career as a nurse at Johnson-Willis Hospital in Richmond, Va., and spent 25 years working in various positions for HCA Inc., culminating as group president for outpatient services. Tavenner was one of several people in government to make Modern Healthcare’s annual list of the 100 Most Influential People in Healthcare.

Marla J. Weston, PhD, RN, FAAN, chief executive officer of the American Nurses Association, has held a variety of nursing roles, including direct patient care in intensive care and medical-surgical units, nurse educator, clinical nurse specialist, director of patient care support and nurse executive. She has served as executive director of the Arizona Nurses Association and deputy chief officer of the Veteran’s Affairs Workforce Management Office. Weston reported that she has had great role models and mentors in her nursing career.

Rankings from Modern Healthcare’s 100 Most Influential People in Healthcare list for 2014.

Nursing News OCT 29, 2018
Compassionate Nurse: The Importance of Compassion in Nursing
Being a compassionate nurse is vital, because it helps ease your patients' pain and suffering while providing the emotional support they need. Learn more about the importance of compassionate care and how your patients benefit with our examples of compassion in nursing.
Nursing News JAN 16, 2020
Do Nurses Take the Hippocratic Oath?
There may not be a Hippocratic Oath for nurses, but that doesn't mean new graduates are completely without a shared moral compass. Learn more about the Hippocratic Oath and how nurse ethics are shaping modern-day patient care.
Nursing News SEP 25, 2018
Critical Thinking in Nursing: Why It's Important and How to Improve
Critical thinking in nursing is the difference between blindly following the doctor's orders and accepting responsibility for your patient's care. Here are some examples of critical thinking in nursing and why it's so important.
Nursing News DEC 13, 2016
Working Over the Holidays? How to Make the Most of It
Holiday shifts don’t have to get you down. Nurses, try these tips for making the most of holiday work schedules, helping colleagues and patients alike.
Nursing News JAN 18, 2019
Nurse Leadership: 5 Ways to Improve Your Nurse Leadership Skills
Nurse leadership skills are vital in advancing your career and improving patient outcomes. Developing your nurse leadership qualities enhances your leadership skills. Learn five ways you can improve your leadership skills in this guide.