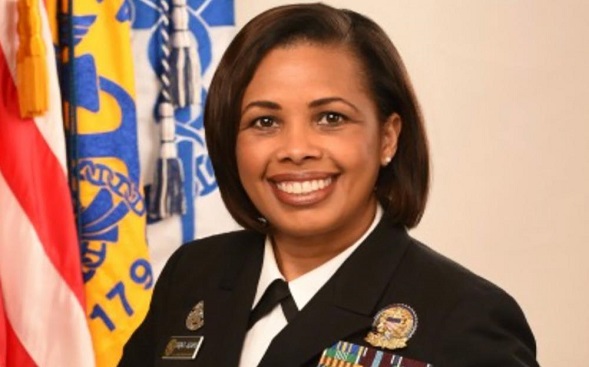 Who would have guessed that one of the best nursing jobs in the country would be to take over the role of “America’s Doctor”?

Rear Adm. Sylvia Trent-Adams, PhD, RN, FAAN, was named acting surgeon general of the United States by Pres. Trump on April 21, 2017, replacing Vivek H. Murthy, MD, why had been installed as the country’s 19th surgeon general in December 2014 by Pres. Obama.
A statement by the Department of Health & Human Services (HHS) said that Murthy was asked to step down by The White House “after assisting in a smooth transition into the new Trump administration.” Murthy’s term wasn’t supposed to be over until late 2018.
Murthy will remain as a member of the Commissioned Corps of the Public Health Service.
FIND your best nursing job with American Mobile.
First non-physician to serve as surgeon general
Trent-Adams is one of the first nurses to serve as surgeon general, and the first non-physician to hold the office. She had served as Murthy’s deputy surgeon general before her appointment.
Previously, Richard Carmona, both a doctor and a nurse, served as surgeon general under President George W. Bush.
Trent-Adams has quickly taken over the surgeon general's social media accounts, including Twitter and Facebook, with her information replacing Murthy’s by Friday night, April 21.
How long she will remain as acting surgeon general is unknown at this time.
The making of a nurse leader
RADM Trent-Adams received her BSN from Hampton University, a master’s degree in nursing and health policy from the University of Maryland, Baltimore, and a doctor of philosophy from the University of Maryland, Baltimore County. She became a fellow in the American Academy of Nursing in 2014.
In the early part of her nursing career, she served as a nurse officer in the Army and as a research nurse at the University of Maryland. In 1992, she joined the Commissioned Corps of the U.S. Public Health Service (USPHS). During her tenure, she has served in a number of roles, including chief nurse officer from November 2013 through May 2016.
She also served as the deputy associate administrator for the HIV/AIDS bureau of the Health Resources and Service Administration (HRSA) before becoming a member of the surgeon general's office.
For more information, check out Trent-Adams’ official biography.
As Murthy left office, he expressed his appreciation for the chance to serve as the nation’s surgeon general in a Facebook post, and offered some support for his successor, stating: “As my colleague Rear Admiral Sylvia Trent-Adams takes over as acting Surgeon General, know that our nation is in capable and compassionate hands.”
The role of the surgeon general
The surgeon general's office and staff are known as the Office of the Surgeon General (OSG). The position is nominated by the president and confirmed by the U.S. Senate.

Often known as “America’s Doctor,” the surgeon general is responsible for communicating the best available scientific information to the public regarding ways to improve personal and public health. The surgeon general also oversees operations of the U.S. Public Health Service Commissioned Corps, comprised of approximately 6,700 uniformed health officers who serve in nearly 800 locations around the world to promote, protect and advance the health and safety of our nation and our world.
Sources: Office of the Surgeon General & The New York Times

Nursing News OCT 29, 2018
Compassionate Nurse: The Importance of Compassion in Nursing
Being a compassionate nurse is vital, because it helps ease your patients' pain and suffering while providing the emotional support they need. Learn more about the importance of compassionate care and how your patients benefit with our examples of compassion in nursing.
Nursing News NOV 09, 2018
Top 10 Advantages and Disadvantages of Being a Nurse
Helping save a life and making a positive difference in your patients’ quality of care are major advantages of being a nurse, but there are also some disadvantages. Decide if a nursing career is right for you with this list of top advantages and disadvantages of being a nurse.
Nursing News SEP 25, 2018
Critical Thinking in Nursing: Why It's Important and How to Improve
Critical thinking in nursing is the difference between blindly following the doctor's orders and accepting responsibility for your patient's care. Here are some examples of critical thinking in nursing and why it's so important.
Nursing News NOV 19, 2018
What Happens When You Have a Suspended Nursing License
Having a suspended nursing license means you can't legally practice nursing. Many reasons could warrant suspension of your nursing license, and the steps required to petition for reinstatement vary by state. Learn more about what happens when you have a suspended nursing license with this guide.