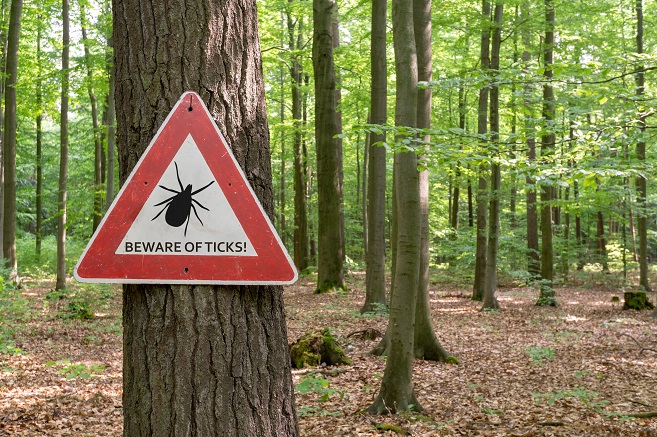 Summer’s a time for camping, hiking and exploring the great outdoors, but along with the natural beauty of the environment come vectors, such as ticks, which carry disease. The Centers for Disease Control and Prevention (CDC) reports an increase in tickborne diseases and recommends taking precautions to avoid ticks.

“The best thing is to prevent that little tick from getting on you in the first place,” said Denise Stagg, PhD, MSN, RN, CNE, assistant professor in the College of Nursing and Allied health at the University of Louisiana at Lafayette.

Nurses play a key role in educating patients about risks and how to stay safe.

The highest number of tick cases occurs in Minnesota, Wisconsin, Virginia and states in the northeast.

“Wherever you have a lot of animals, you are going to see a lot of ticks,” Stagg said. Nationwide, the CDC receives notice of about 30,000 people developing Lyme disease annually. However, a Journal of the American Medical Association study estimates 300,000 cases occur each year.

“You cannot go by symptoms alone,” said Phillip J. Baker, PhD, executive director of the American Lyme Disease Foundation. “You could have the flu or Lyme disease.”

Nurses should ask patients about where they have been, in addition to inquiring about their symptoms, Stagg advised.

Blood tests for the antibodies may be helpful in diagnosing Lyme disease a few weeks after the infection began. It takes antibodies four to five weeks to appear after an infection, Baker added.

Doxycycline, cefuroxime axetil or amoxicillin are used to treat Lyme disease, according to the CDC and the infectious Diseases Society of America guidelines. Treatment should not depend on laboratory tests, Baker indicated.

“It’s curable, even if it is detected late,” he said. “Sometimes, the symptoms take a while to go away.”

“The most controversy has to do with chronic Lyme disease,” Baker said.

For thousands of years, ticks and Lyme disease have affected people. The mummy Otzi may have had Lyme disease. People in Connecticut started developing Lyme symptoms in the 1970s. Lyme disease was first identified in the United States in the early 1980s by scientist Willy Burgdorfer. Since then, Lyme has become a public health problem, according to the Bay Area Lyme Foundation. The CDC considers Lyme a notifiable disease.

Whether during National Safety Month or anytime in the spring, summer or early fall, avoiding tick bites is important.

“If you don’t have a real good cold winter, you will probably have a bad Lyme [season],” Stagg said.

Before heading out into the woods, she recommends checking at the CDC website to determine if Lyme is being reported in the region where you want to hike.

Tick disease prevention includes wearing long-sleeved shirts and long pants, treated with permethrin when walking in the woods, hunting, or in areas with high grass and leaf litter. Use DEET insect repellant or others recommended by the CDC. Tuck the pants into socks. Run the clothes through a dryer on high for 10 minutes after removing them.

“When you come in from walking, look at the clothes, because sometimes they hitch a ride,” explained Stagg, who also recommends checking dogs who run in the woods. Dogs also should be on tick prevention.

After being in the woods, people should shower or bathe and check their skin for the presence of a tick. Use a mirror or ask someone to check your back. People do not usually feel a tick bite.

“Lyme doesn’t transmit [the bacteria] until the tick has been embedded for 36 to 48 hours,” Stagg said.

Removing the tick as soon as someone comes in from a possible exposure reduces the chance of transmission. People can remove the tick themselves with a tweezers or go to an urgent care center, she advised.

“One of the most important things in removing a tick is not to remove it by its abdomen,” Stagg said. “You have to go in underneath the belly and get to the head of the tick, which is the part attached to the skin.”

Do not try to burn or freeze the tick off. Stagg said those techniques do not work.

“People should not be so afraid,” Stagg said. “It’s OK. Do a once over, check yourself well and if you see one, do not go into a panic mode…. Lyme is not in every tick.”

Nursing News NOV 19, 2018
What Happens When You Have a Suspended Nursing License
Having a suspended nursing license means you can't legally practice nursing. Many reasons could warrant suspension of your nursing license, and the steps required to petition for reinstatement vary by state. Learn more about what happens when you have a suspended nursing license with this guide.
Nursing News SEP 25, 2018
Critical Thinking in Nursing: Why It's Important and How to Improve
Critical thinking in nursing is the difference between blindly following the doctor's orders and accepting responsibility for your patient's care. Here are some examples of critical thinking in nursing and why it's so important.
Nursing News JAN 16, 2020
Do Nurses Take the Hippocratic Oath?
There may not be a Hippocratic Oath for nurses, but that doesn't mean new graduates are completely without a shared moral compass. Learn more about the Hippocratic Oath and how nurse ethics are shaping modern-day patient care.
Nursing News OCT 29, 2018
Compassionate Nurse: The Importance of Compassion in Nursing
Being a compassionate nurse is vital, because it helps ease your patients' pain and suffering while providing the emotional support they need. Learn more about the importance of compassionate care and how your patients benefit with our examples of compassion in nursing.
Nursing News AUG 28, 2018
How To Get a Compact Nursing License
Learn how to obtain a compact nursing license with a few easy steps. Whether you're looking to relocate to be closer to family or just enjoy traveling the country, a compact nursing license is your ticket to advancing your career.