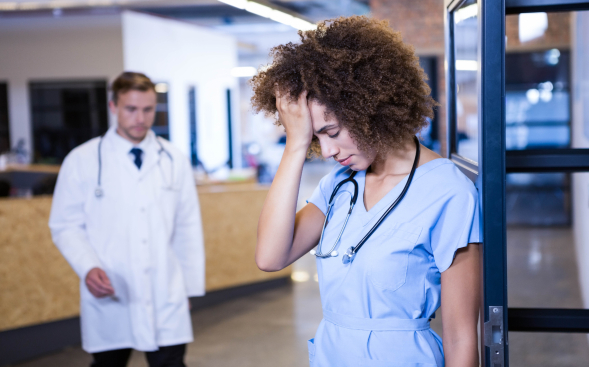 Lateral Violence in Nursing: How You Can Make a Difference

Lateral violence in nursing is more common than many people realize, and chances are you’ve either experienced or witnessed it yourself.

Lateral violence, also referred to as horizontal violence, is a form of nonphysical abuse in the workplace between co-workers. It includes overt or covert acts of verbal and nonverbal aggression that can hurt morale and negatively impact your ability to provide optimal patient care.

You can make a difference and help put an end to workplace violence in nursing by showing your peers the same empathy, compassion and respect you show your patients and expect for yourself.

Visit American Mobile to find a position in the travel nursing field and put your nursing skills to work.

Lateral violence in nursing is too common

Examples of lateral violence in nursing

Jack Plaxe, founder of the Security Consulting Alliance, is a career security professional with nearly 30 years of experience as a consultant and corporate security director. He defines lateral violence as “behaviors between co-workers that generally fall into the categories of workplace bullying or workplace violence. However, the behavior often falls short of physical violence, leading it to not be taken as seriously as other forms of workplace violence.”

According to Plaxe, examples of lateral violence in nursing or any workplace include:

Other examples of lateral violence include snide comments, sarcasm, belittling gestures or comments, inappropriate or unjust evaluations, withholding information, holding grudges and displaying favoritism. Even though none of these behaviors are physically violent, Plaxe says they often result in employee discontent and distress and can lead to physical violence. He goes on to suggest ways you can help put a stop to workplace violence in nursing through your own efforts and by involving others within your organization.

To combat bullying within the nursing profession, it’s important to increase awareness, empathy and understanding among co-workers through appropriate training and team building efforts.

Training on conflict resolution is also important he says because “confronting lateral violence is not easy. Conflict resolution training can help employees deal with problems and learn how to model good behavior in the workplace.”

He also suggests promoting team building because employees who feel like they’re part of a team are less likely to engage in lateral violence in nursing. Creating a support network between your peers and advocating for your fellow nurses, as you would your patients, goes a long way to promoting a team atmosphere.

Yelling back or remaining silent following an angry outburst, unfair criticism or other verbally abusive tactics by a co-worker isn’t the best response to lateral violence in nursing. Four key ways to respond appropriately include managing your emotions, using empathy, asserting your boundaries and making direct requests.

Involving others in your efforts

When personal efforts don’t seem to make a difference, it may be time to involve other people within your organization to get results. Start by reporting lateral violence to your immediate supervisor, and then work your way up the ladder if the problem isn’t addressed or leadership doesn’t do enough to change the situation.“

If employees and supervisors cannot deal with lateral violence, Human Resources should be brought in to assist,” says Plaxe. “HR often has professional training and investigative resources to manage situations of incivility or violence in the workplace. HR may also be viewed as a neutral third party in these situations rather than an employee who is directly involved.”

“If a situation escalates, involve security professionals,” advises Plaxe. “Security may have internal resources or access to consultants who specialize in managing workplace violence and assessing potential threats of violence.”

While you don’t have to like everyone you work with, everybody deserves to be treated with respect, including yourself. If you experience lateral violence in your nursing job, deal with it immediately, directly and professionally, and then get others involved if the behavior continues.

Nursing News JUN 26, 2020
7 Ideas for Celebrating Nurses Week
National Nurses Week is fast approaching on Monday, May 6. Discover some ideas and suggestions you can use to help celebrate this important occasion at your hospital, doctor's office or other medical facility.
Nursing News JAN 16, 2020
Do Nurses Take the Hippocratic Oath?
There may not be a Hippocratic Oath for nurses, but that doesn't mean new graduates are completely without a shared moral compass. Learn more about the Hippocratic Oath and how nurse ethics are shaping modern-day patient care.
Nursing News NOV 19, 2018
What Happens When You Have a Suspended Nursing License
Having a suspended nursing license means you can't legally practice nursing. Many reasons could warrant suspension of your nursing license, and the steps required to petition for reinstatement vary by state. Learn more about what happens when you have a suspended nursing license with this guide.
Nursing News SEP 25, 2018
Critical Thinking in Nursing: Why It's Important and How to Improve
Critical thinking in nursing is the difference between blindly following the doctor's orders and accepting responsibility for your patient's care. Here are some examples of critical thinking in nursing and why it's so important.
Nursing News NOV 9, 2018
Top 10 Advantages and Disadvantages of Being a Nurse
Helping save a life and making a positive difference in your patients’ quality of care are major advantages of being a nurse, but there are also some disadvantages. Decide if a nursing career is right for you with this list of top advantages and disadvantages of being a nurse.