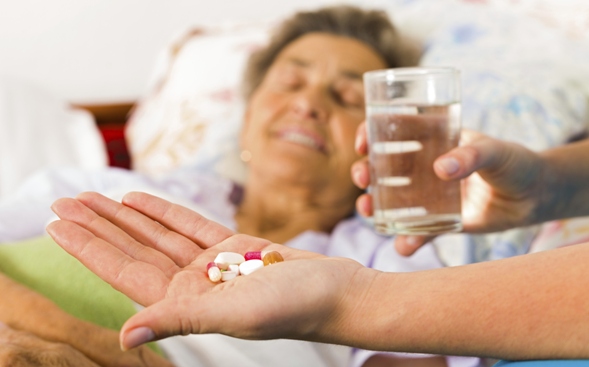 Reducing distractions during medication administration cut errors in half at one California hospital, and now nurses are spreading the concept, sharing with other facilities safer medication-pass processes.

Nurses on the hospital’s quality forum recognized a need to reduce medication errors and began brainstorming ideas. The facility put into place special procedures, such as double-checks on morphine drips, insulin and other high-alert medications.

“We felt there needed to be a safeguard in place as the nurse went through the entire process of medication administration,” said Richards, who suggested wearing a vest when passing meds, something she had donned to decrease distractions for a different purpose at another facility.

The nurses agreed and a med-surg orthopedic floor with a high error rate volunteered to pilot the vests in 2006.

Initially, the hospital ordered bright orange, construction-style vests off the Internet, which the nurses thought looked “cheesy.” They also found them hot and resisted sharing them with fellow nurses.

“They felt it was demeaning,” Richards said.

But of even greater concern, despite education about not interrupting nurses during med passes, the vests seemed to attract attention. The hospital tried again on a renal floor, with separate medication rooms. But again, it just didn’t seem to click. “We were really thinking about abandoning the whole idea, because the nurses did not like it,” Richards said.

But when the medication administration data came in at the end of the year, the hospital found that during the four and five months after the pilot finished, those two units combined had a 47 percent decrease in errors. The units had not done anything else to reduce errors, just the education about no distractions and the vests.

“At that point we knew we could not turn our backs on our patients,” Richards said.

The quality forum nurses tweaked the program, finding more attractive neon yellow vests and reaching out to the medical staff, housekeeping and other departments for support.

Kaiser South San Francisco kicked off the new program hospital-wide in April 2007, with the exception of oncology, which refused to participate, writing letters and signing a petition. The hospital decided not to play hardball.

“We were blown away in May. The hospital experienced a 20 percent decrease in medication errors, even though one unit refused to participate,” Richards said. “And that was the only unit that experienced an increase from their previous month’s error rate.”

One by one, Richard said, the oncology nurses joined the no-distraction program.

Kaiser South San Francisco shared its results with other Kaiser facilities through the company’s Sidney R. Garfield Health Care Innovation Center. Nurses suggested wearing a sash, instead of a vest, if the nurse preferred, and Kaiser hospitals throughout the region kicked off the “MedRite” process in March 2008. Richards said she could not release the rate of improvement but that it exceeded South San Francisco’s results, something she attributes to the other facilities’ receiving a more complete package.

In addition to decreasing distractions, the MedRite program includes verifying the five rights, checking allergies and the MAR, washing hands, turning down the television volume, turning up the lights, educating the patient about the medication and documenting.

“It may seem like more work but, in my experience, it has brought a safer culture into nursing,” said Suzi Kim, RN, BSN, a staff nurse at Kaiser West Los Angeles.

“It’s a more focused process,” Kim said. Without interruptions, “we can think clearly.”

Patients and families often ask about the sash. Kim said some will joke about it, inquiring if she’s a pageant queen or a girl scout. But she receives positive feedback once she explains the purpose.

The Institute for Healthcare Improvement highlighted the medication-pass distraction program at its 2007 Fall Harvest, celebrating the improvement work of more than 3,600 hospitals by “harvesting” the ideas, innovations and best practices they are using to improve care and reduce harm.

“As Harry Truman said so many years ago, it’s amazing what you can accomplish when you don’t care who gets the credit,” Richards said.

Nursing News OCT 29, 2018
Compassionate Nurse: The Importance of Compassion in Nursing
Being a compassionate nurse is vital, because it helps ease your patients' pain and suffering while providing the emotional support they need. Learn more about the importance of compassionate care and how your patients benefit with our examples of compassion in nursing.
Nursing News NOV 09, 2018
Top 10 Advantages and Disadvantages of Being a Nurse
Helping save a life and making a positive difference in your patients’ quality of care are major advantages of being a nurse, but there are also some disadvantages. Decide if a nursing career is right for you with this list of top advantages and disadvantages of being a nurse.
Nursing News SEP 25, 2018
Critical Thinking in Nursing: Why It's Important and How to Improve
Critical thinking in nursing is the difference between blindly following the doctor's orders and accepting responsibility for your patient's care. Here are some examples of critical thinking in nursing and why it's so important.
News MAY 04, 2022
Nurses Month 2022: “Nurses Make a Difference”

For the third year in a row, the American Nurses Association (ANA) has replaced Nurses Week with Nurses Month and has extended the theme ‘Nurses Make a Difference’ to “honor the varying roles of nurses and their positive impact on our lives”. The month-long celebration makes room for more gestures of appreciation and more opportunities to show the value nurses bring to our communities.