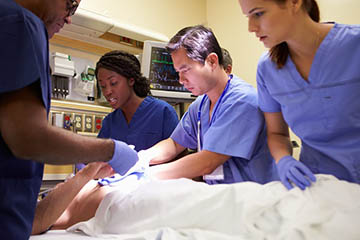 According to the Centers for Disease Control and Prevention, more than 140 million emergency room visits occur annually in the United States. Every emergent health issue, from advanced pneumonia to potentially fatal injuries following an accident, makes its way through the open doors of the ER to be treated.

Most nurses are called to ER nursing for the fast paced, unique experiences and demanding nature of the job. But what about those times when emergency environments are blurred and ethical dilemmas arise?

SEARCH 100's of ER jobs by state or shift

Wait times. For nurses who are committed to upholding ethical responsibilities, working in an ER where the wait times are high consistently poses an ethical dilemma. For nurses who want to see and treat every patient that comes in to the ER, it can be disheartening when wait time are so high that patients are leaving before being seen.

This being a growing concern across multiple EDs in the country and The Online Journal of Issues in Nursing notes that it is crucial that leadership and clinicians be willing to re-imagine the way the ED operates.

Aggressive and non-compliant patients. In an ER setting, nurses are ethically charged with the task of treating patients who are both willing and unwilling to comply with medically sound options.

Lori Balman, RN, BSN, is an ER nurse in Florida. She says that situations in which patients are conscious but not receptive to available treatments can be the most ethically challenging.

“One of the most challenging dilemmas I’ve faced as an ER nurse involves aggressive, potentially combative patients brought to the ER that decline medical care, but clearly have acute medical issues. It’s difficult to walk the fine line between allowing patients to be autonomous and advocating for needed medical treatment, all while trying to maintain the safety of yourself and others within the unit,” says Balman.

Working with surrogates. Specific to ER nursing, confidentiality and patient rights issues can present ethical dilemmas in a number of ways. One such example was reviewed in the New England Journal of Medicine. In this case study, a homeless male, whose closest relatives lived 1,500 miles away, was seen in the ER after having a seizure. The male was “found to have a subarachnoid hemorrhage and acute hydrocephalus,” which resulted in a poor prognosis.

For this gentleman, two out of three family members believed the best course of action was comfort care while a third felt that the patient would want to “fight” until the end. The third family member was in favor of pursuing riskier treatment options. This specific case did not become ethically complicated until later in the treatment stage, but discord among family members and, in this case, medical surrogates is not uncommon in an ER setting.

In the above-mentioned case, the journal proposes three options to combat the ethical dilemma: have an ethical consultation with the surrogate, create a DNR and transport the patient to a SNF or remove life support.

Nurses employed in emergency departments face these and other ethical dilemmas daily. Though some have taken their concerns directly to leadership, others use their voice to advocate for improved systems and practices on a national level. It is impossible to eliminate some ethical dilemmas, like those associated with confidentiality and autonomy, but there is room for improvement within the healthcare services delivery system.

Nursing News OCT 29, 2018
Compassionate Nurse: The Importance of Compassion in Nursing
Being a compassionate nurse is vital, because it helps ease your patients' pain and suffering while providing the emotional support they need. Learn more about the importance of compassionate care and how your patients benefit with our examples of compassion in nursing.
Nursing News JAN 16, 2020
Do Nurses Take the Hippocratic Oath?
There may not be a Hippocratic Oath for nurses, but that doesn't mean new graduates are completely without a shared moral compass. Learn more about the Hippocratic Oath and how nurse ethics are shaping modern-day patient care.
Nursing News MAY 06, 2022
Special Discounts for Nurses